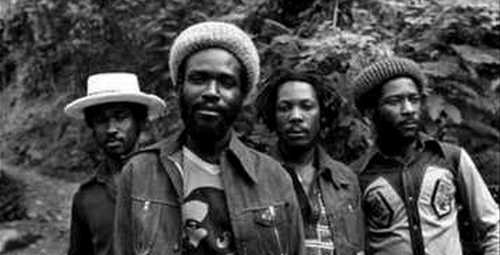 With “The Small Axe Guide To Bands & Vocal Groups”, the ever busy Ray Hurford publishes another handy little guide in his worthwhile “Small Axe Guides” series of books. After previously having published guides to “Singers”, “Deejays”, “Producers”, “Rock Steady”, “Reggae 68-70”, “Dub”, “Roots 71-75” and “Rockers (Part 1)”, the 9th volume brings reggae bands and vocal groups from Jamaica, the UK and even the US Virgin Islands and Switzerland to the reader’s attention. Not as one probably might expect by including a biography of each and every band & vocal group featured in the guide, but by means of reviews of their music releases.

The latter is actually the main concept of the very useful “Small Axe Guides”: the history of Jamaica’s popular music told through reviews of music releases. It implies that you can’t expect these books to be complete, because it simply ain’t possible to cover everything that has been put out. That’s why these books are rightly called “Guide”. All the books are a labour of love and the costs — when you purchase one directly from Ray Hurford — are kept extremely low in order to give as many people as possible the opportunity to get a copy.

This new 158-page A5 paperbook features reviews of music from nearly 100 bands and vocal groups with over 300 accompanying photos and graphics. Featured are reviews of (selected) albums from widely known and successful Jamaican & UK reggae bands and vocal groups such as The Abyssinians, Aswad, Black Roots, Black Uhuru, The Congos, Culture, The Heptones, Israel Vibration, Toots & The Maytals, Mighty Diamonds, Morgan Heritage, The Skatalites, Steel Pulse, Twinkle Brothers, Wailing Souls and, of course, Bob Marley & The Wailers. But also lesser known and less successful outfits are found here including Anthem, Axx of Jahpostles, Dan Hudson & The Seers, Earth Roots & Water, Jezzreel, Sons Of Jah, Restless Mashaits, The Rastafarians and The Undivided, which eventually might cause an interest in these artists by those not familiar with these names and their music.

Not forgotten, of course, are Sound Dimension and Soul Defenders, bands that played an important role in the history of the legendary Studio One. Perhaps the biggest surprise, along with the inclusion of Voicemail and Ward 21, is the extensive attention for the music of Midnite, one of the most prolific and consistent bands in reggae’s history. No less than 17 pages and 28 album reviews are dedicated to Ray Hurford’s favourite band, inexplicably ignored in the UK.