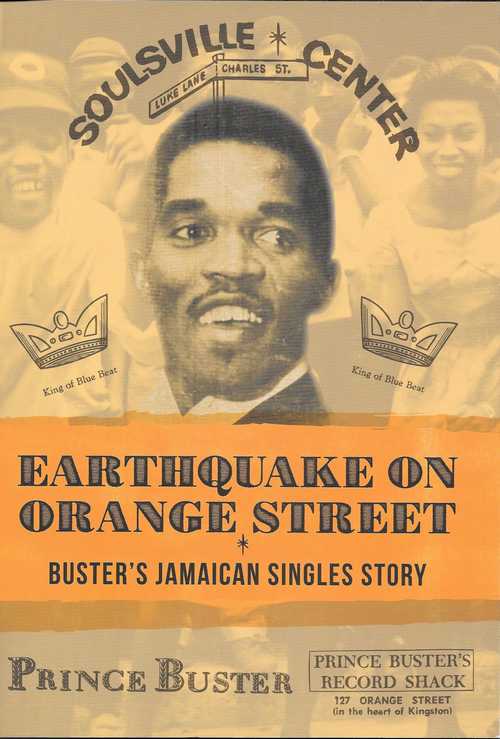 Jeremy Collingwood’s book “Earthquake On Orange Street – Buster’s Jamaican Singles Story” is a mind-boggling discography devoted to the Jamaican releases of Prince Buster’s productions from 1961’s “Oh Carolina” by the Folkes Brothers to 1977’s “Uganda” by Yusuf Ali & The Revolutionaries.

Born Cecil Campbell on May 28, 1938, Prince Buster has played a crucial role in the history of modern Jamaican popular music; from mento, Jamaican boogie and ska to rocksteady and early reggae. The Jamaican dance halls have given to the world the twin-deck sound system, the sound clash, the dub remix, the foregrounding of drum & bass in that mix, sampling, the rapping deejay and the personality selector – the entire transmission system of modern dance music. All were pioneered in Jamaica, years, even decades, before they were taken up around the globe. And in the hothouse atmosphere of the dance hall, Prince Buster was a crucial innovator – if anyone can claim to have invented ska, he can. In his time he has been dance hall gateman, owner and operator of the ‘Voice Of The People’ sound system, producer and label owner, singer and percussionist – the self-styled but undeniable King of Ska.

Living on Orange Street in the downtown area of Central Kingston as a teenager, Buster became leader of a gang from nearby Luke Lane. But before that, as a child in the early 1940s, he had spent time away from Kingston in the country, where he first discovered that he liked music. When he returned to Kingston, American swing and bop, boogie and r&b were the new musics of the day. The then emerging new culture of sound system quickly attracted Prince Buster’s attention and he became a follower of Tom the Great Sebastian.

The pace and the competition between sound systems was increasing; the mid-1950s saw Arthur ‘Duke’ Reid, a former champion marksman in the police force, enter the arena. He was followed by the hip underdog, Clement ‘Coxsone’ Dodd. Reid had the strength of money and what amounted to a sizeable gang of ‘bad man friend’. Many were also Buster’s friends – he had grown up among them in Back A Wall, the shantytown district that once stood on the site of Tivoli Gardens in present day Kingston. The streetwise Buster, feeling a natural sympathy for the underdog Coxsone, became more actively involved in the operational side of running a sound system after he was introduced to Coxsone. He found himself fulfilling a variety of roles for the musically inclined businessman: providing security, handling ticket receipts, identifying & sourcing music as well as working in the essential role of selector.

Voice Of The People

Songs like “Warpaint” by Basil Gabbidon, “Shake A Leg” by Derrick Morgan and the biggest hit of all these early tunes, Eric Morris’ nursery-rhyme boogie “Humpty Dumpty” set the pattern for Buster’s early ska output. At this time he also produced the Folkes Brothers “Oh Carolina”, the first yard tune to incorporate Rasta drumming. The style would be heard in full effect – on piano, guitar and horns – on songs like the scorching “Madness”, recorded the following year. Buster pursued this Jamaican direction further over the next few years – many of his own songs were updates of Jamaican mento and folk song, as well as the more usual adaptations of US r&b and other foreign music including Afro-Cuban and Calypso.

The knowledge he gained about the financial and logistical aspects of staging a sound system dance was put to good use when Buster made the decision to start his own sound system called ‘Voice of the People’. Once Buster had his sound running, he soon took his first steps into commercial recording; his entry into production came about when Duke Reid, temporarily absent from the business, asked Buster to produce a session for him. According to singer Derrick Morgan, Buster recorded 12 tunes at Federal studio, and only gave one to Duke, keeping the rest for himself. This first batch of 45s in late 1960 yielded a dozen hits, including his own “They Got To Go” directed towards his sound system rivals, and already showing the stressed afterbeat syncopation that would typify ska proper, as well as marking a distinct step away from the US boogie shuffles that Coxsone and Duke Reid had been recording.

When “Oh Carolina” was licenced to Melodisc Records in London and released on their ‘Blue Beat’ imprint, Buster began a business relationship with label boss Emil Shalet. The collaboration between the European entrepreneur and the Jamaican soundman would lead to the release of over 600 titles in the UK, on Blue Beat, and subsidiary labels Dice and Fab over the next few years. This vast catalogue includes some of the greatest ska, rock steady and reggae sides ever made. Today we can see him as a major force in the foundation of modern Jamaican popular music, and an essential Jamaican producer, investing everything he did with the force of his creative personality.

The titles of the 45s (A and B sides) are listed by year of release with matrix numbers and introductory notes for each year. Packed with information, there is a black checker which will help identifying your white label pre-releases, a list of the Rock-A-Shacka reissues and pages of full colour life size reproductions of the various label designs, as well as a sample of white labels complete with “sound man markings”. Hours of fun and a useful resource, this is the result of many hours of furrow-browed research and really only serves to increase ones desire to see more of Prince Buster’s music reissued immediately and properly.