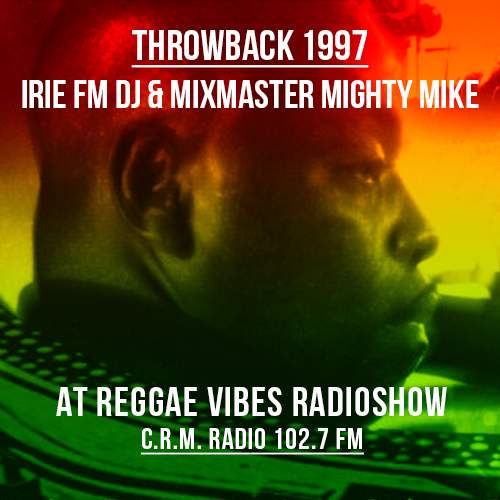 On Thursday evening July 10, 1997, we were doing our weekly Reggae Vibes Radioshow on the local C.R.M radio station, when – at the beginning of the show – we got a phonecall from the RUNNetherlands office. “If we would like Irie FM DJ & MixMaster Mighty Mike and Prezident Brown to come to the studio.” We instantly agreed because it was something that happens once in a lifetime. At the time Mighty Mike had established his name as ‘mixmaster’ with the RUNNetherlands released megamix cds “Heathen Chant” and “Drum Song”, a treatment usually given to hardcore ragga riddims. And then the long wait started! No mobile phones only landline phones, so there was no possibility to get in contact. We used the landline phone to call RUNNetherlands’ office, and we were assured they were on their way to the studio. We had already started with the second hour of the show and Mighty Mike and Prezident Brown still hadn’t shown up, so we decided that one of us would leave the studio and would take a walk along the road to see if a car with the two Jamaicans was arriving. And indeed, after about ten minutes they arrived with their driver telling they’d been driving around in circles for quite some time. What followed in the studio is documented on this recording.