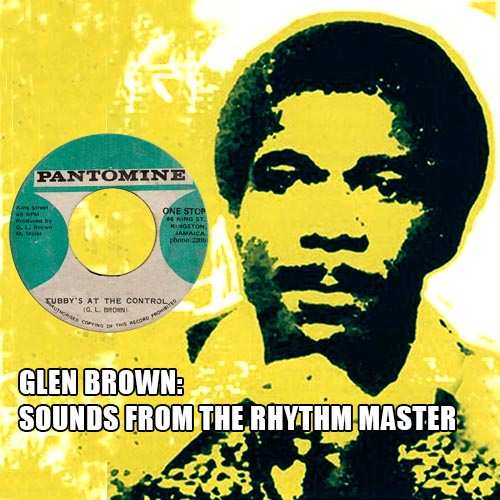 Jamaican singer, musician, and record producer Glen Brown, also known as God Son and The Rhythm Master, began his career in the ’60s as a vocalist with Sonny Bradshaw’s jazz group and recorded duets with Hopeton Lewis, Lloyd Robinson, and Dave Barker. At the beginning of the ’70s, he produced and released records on the Shalimar label before he set up his Pantomine and Dwyer imprints. Record production was largely a hand-to-mouth affair for Glen Brown, whose tunes were often pressed in tiny quantities with labels re-used from previous releases, or occasionally on blank labels. But drop the needle into the groove and his ability as rhythm master is immediately evident. Though he put out some strong vocal tunes, he’s mainly associated with the top-quality instrumental and deejay versions of his highly original and supremely tough backing tracks, underpinned by sinuous, muscular basslines and laced with emphatic, cracking percussion. Glen Brown was accustomed to leave his riddims with King Tubby whom he asked to mix ‘five or six styles’. Once Glen Brown’s distinctive touch is appreciated, this ‘Sounds From The Rhythm Master’ becomes essential listening. Glen Brown died in 2019 at the age of 75.