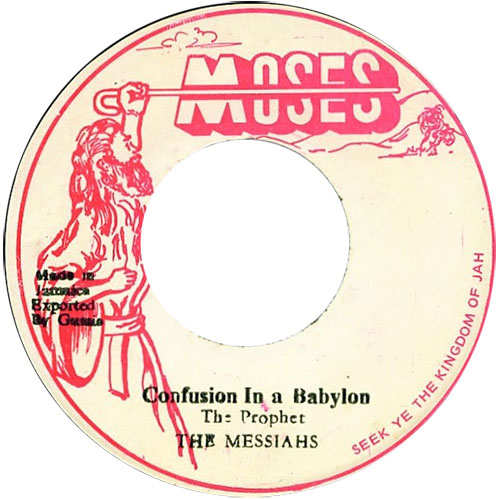 THE MESSIAHS – CONFUSION IN A BABYLON (AKA MUTINY) – MOSES

Mutiny, renamed Confusion In A Babylon when released on the Moses label in Jamaica in 1979, is a song written by record producer and singer George Winston Boswell aka Winston “Niney” Holness. This hard roots stepper credited to The Messiahs, one of the many aliases used by Niney The Observer, is a driving workout on the theme of righteousness with echoing double time drums and Niney’s apocalyptic vocal riding the riddim. The song was voiced at Black Ark where the vocal was mixed by Lee “Scratch” Perry. The riddim was recorded at Channel One with Sly Dunbar on drums, “Fully” Fullwood on bass, Tony Chin and “Chinna” Smith on guitars, Tommy McCook and Bobby Ellis on horns. It’s Freddie McGregor who can be heard on keyboards, while The Heptones provided the backing vocals. Because of its lyrical content, the song was banned and not played on the radio and thus only few singles were pressed.