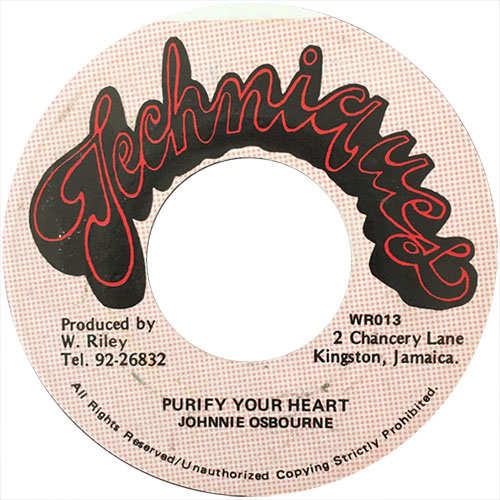 An absolute roots killer, this electrifying vocal cut of Johnny Osbourne’s single Purify Your Heart from the early 1970s. Produced by Winston Riley, the lyrical content of this song contains biblical references. Besides the 7″ single, there’s also a 12″ cut of this tune b/w Inflation, released in Jamaica on the Techniques label in 1981 and in the UK on Black Joy (b/w Politician). Later, alternative vocal and dub cuts of this superb roots tune were released. In 1983 Greensleeves put out a 12″ single with Purify Your Heart on the B-side, a version Johnny Osbourne recorded for Prince Jammy. Winston Riley also produced Jimmy Riley’s Prophecy on the same riddim.