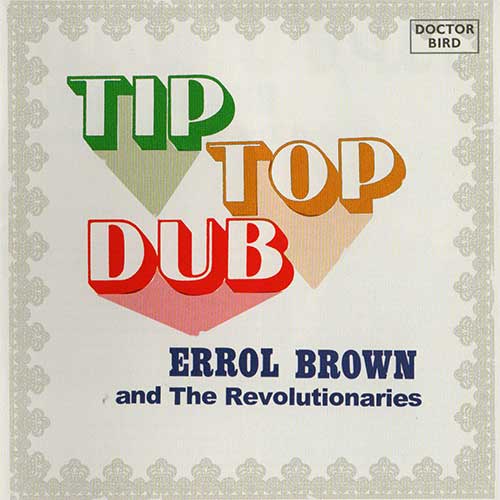 The 1970s saw a growing popularity of the so-called versions, a musical approach based on deforming, stripping, and rebuilding the original tune and came known as dub music. This exciting cutting edge of reggae music was more or less originated by the late great King Tubby. Engineers/producers such as Errol ‘ET’ Thompson, Lee Perry, Prince Jammy, Phillip Smart, and Scientist, were responsible for a steady output of this exciting new dimension to Jamaican music. By the end of 1976/early 1977, the dub craze had reached its peak with hundreds of dub albums being released, as every producer maximized the financial return of his riddims. However, most of these dub albums were pressed in very small quantities and disappeared quickly.

Errol Brown was a nephew of Treasure Isle owner Duke Reid and was trained by engineer Byron Smith when he started as a junior engineer at his uncle’s studio. After Duke Reid died in 1974, Mrs. Sonia Pottinger took over and Errol Brown became the senior man in the studio. He dubbed up the old rocksteady and early reggae masterpieces, of which results can be found on three dub albums namely Treasure Isle Dub Vols 1 & 2 and Pleasure Dub. He also ventured into mixing dub versions of contemporary productions released through Sonia Pottinger’s labels High Note and Sky Note. This double cd, named after Sonia’s record shop Tip Top Records, brings no less than 42 slices of fine dub workouts from the period 1977/78.

Tip Top Dub is a ‘must have’ album, if only because it contains no less than 25 songs that have never been released in this format before. Adding to the quality of the tunes are the top musicians known as The Revolutionaries. Drummer Sly Dunbar and bassie Ranchie McLean – later replaced by Robbie Shakespeare – were joined by a constantly changing group of outstanding musicians such as Earl ‘Wire’ Lindo, Radcliffe ‘Dougie’ Bryan, Ansell Collins, Sticky Thompson, Bongo Herman, Bo Peep, Errol ‘Tarzan’ Nelson, Skully Simms, and Robbie Lyn.

Errol Brown’s strength lay in limiting sound effects. It had become more or less common to use extravagant effects when remixing the songs. Think of honking horns, animal sounds, slamming doors, and ringing phones. Errol kept it simple, with the right amount of echo and delay he managed to create a perfect atmosphere, often supplemented with vocal fragments.

It is not difficult to track down the vocal version of most tracks. We pick a few of our favorites, but it should be noted that we couldn’t find a weak song. The first CD kicks off strong with Love Dub, the dub version of Without Love, originally by Ken Boothe, but this one comes from Hell & Fire’s cover version. The vocal track is on Hits Of 77, check the review of that album here. Channel One stalwarts, Earth and Stone, scored with No Time To Lose, the adaption –Winning Version, with vocal snippets, is very nice. Don Drummond’s immortal composition Man In The Street is revitalized dubwise as Chapter 15. From the undisputed Queen of Reggae, Marcia Griffiths, 5 dubs can be found here. The dub of the magnificent Peaceful Woman is a perfect version, supported by the famous Hammond organ riff. From Justin Hinds, one of Jamaica’s most gifted songwriters, comes the vocal version of Rig-Ma-Roe Game Dubwise. By the way, that song can be found on Can’t Stop The Dread, read the review here. Daughter Cherry’s only(?) achievement was the rootsy single Babylon You Guilty, released in 1977. The dub –Babylon A Dub, with fluttering vocal snippets, is definitely worth checking out.

Full of anticipation we put the second disc in the CD player that spotlights mainly recordings first issued in 1978. Of course, we are not disappointed. One of the many outliers is Conference Dub, the dub of Delroy Wilson’s sublime version of the Chi-Lites classic There Will Never Be Any Peace (Until God Is Seated At The Conference Table). Roots Man Dub, with plenty of vocal snippets, is the adaptation of Roots Man Survival by Mikey Dread, known for his radio show Dread At The Controls and label of the same name. Acclaimed deejay Ranking Joe steps up with Shiney Skank, riding the Shank I Sheck riddim in Bobby Ellis’ version. Unknown Chockey Taylor scored with False Dread, and his tune is perfectly treated with some serious echo and reverb effects. Marcia Griffiths returns with Dub In Dreamland, while Nurses Skank is a swinging version of Jah Thomas’ Come Nurse who in turn used the well-known riddim Pressure And Slide.
Of the three closing tracks, it is stated in the liner notes that they have not yet been traced back to the vocal versions, so if you know more about this, please contact Cherry Red Records!

Conclusion Yet another unmissable, well-documented release from Doctor Bird.